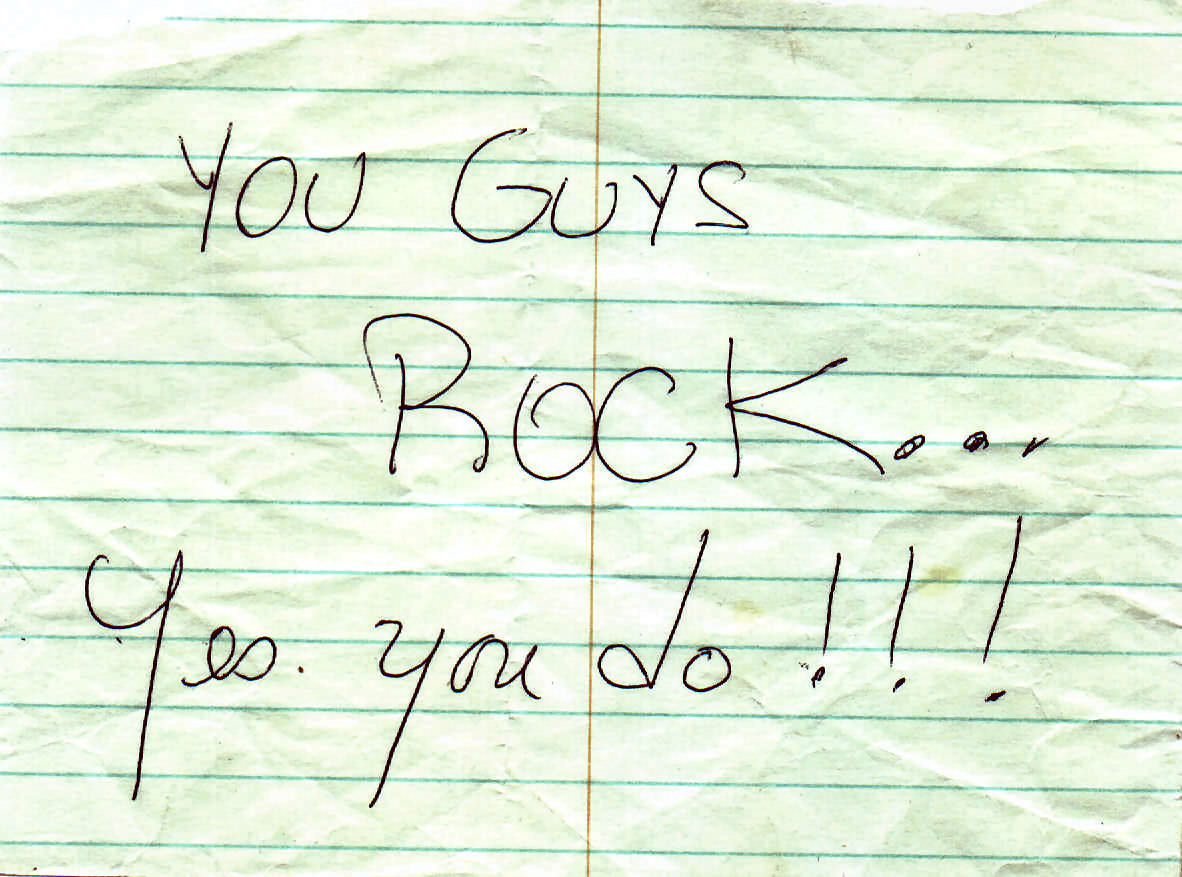 Kudos to IBM! For the first time since I can remember, they have come out, loud and proud about storage technology and capabilities that truly do trump anyone else in the industry. And they didn’t just brag about the fact they have better technology. They made it abundantly clear that this announcement is about providing significant customer value. IBM has made a very bold statement about their all flash systems and what they will do for customers, TODAY.

While doing a bunch of work over the last few months on flash, it is nice to see that other storage brethren still like to portray a tremendous amount of FUD, especially when they don’t have real GA (general availability) products shipping (EMC). I also saw a number of tweets from NetApp’s CIO, who genuinely believes that they have the best “all flash” storage products available and that their announcement a month or so ago makes them the leader in Flash (well, maybe in 2014 when the actually have a product to ship). Don’t get me wrong, it’s good to be a cheerleader for your products, just do it with some shred of truth (Oracle, trust me your not faster by any stretch).

2) A One Billion dollar investment in flash through 2015

3) Twelve CoCs or centers of competency around the globe helping customers migrate to an all flash environment.

But what I find more interesting is not “what” they announced, but the “why” this announcement is more important than other flash announcements as well as the fact that they had 4 customers on a panel, hosted by David Vellante (@dvellante), Founder of Wikibon, an independent analyst, who have all transformed their data centers leveraging IBM all flash systems.

One of the main reasons we are seeing such a deluge of flash conversations recently (a month ago, NetApps Flash Array Announcement, two weeks ago, Violin, Fusion I/O and EMC all had flash announcements during what the industry termed “flash week”) is that when IT takes a step back and looks at all of the components that make up their environment (see Figure 1), they see that in the last decade, CPU speeds have increase as much as 10x, DRAM speeds have increase 7x to 9x, networking speeds have increase 100x, Bus speeds have increased 20x but disk speeds have only increase 1.2x. Disk is the slowest component in the environment and something has to change. Now this will require some data center redesign (which is why IBM is investing in the CoCs), but this redesign is necessary if customers want to have a competitive advantage over their peers. 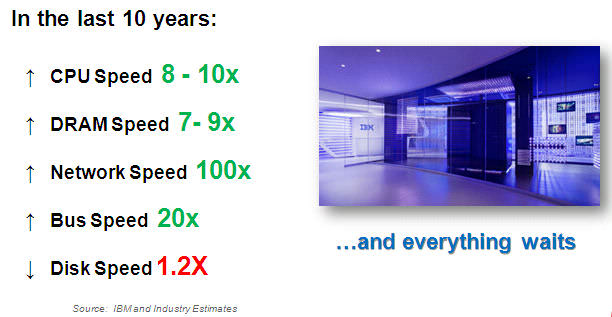 Another interesting thing about this announcement is that, while everyone else (vendors) are talking about performance; the real conversation about flash is economics. Yes flash is fast, everyone’s flash is fast, but that is only a part of the reason why corporations deploy flash. In the end, flash just makes much more economical sense.

While it is true that flash/SSD drives are about 3x more expensive than regular high performance HDD, the overall savings you obtain in the datacenter by lowering your utilities, reducing your server count, which reduces your software license costs, all play a part in the total economics within the data center.

Let’s take a look at just of a few of the economic savings. First, think about your storage utilization. If you have 100 200GB HDDs that you are short stroking in order to increase your database performance, you are probably only getting 25% storage utilization which means you are wasting valuable space. This means that if your drive is $100/GB, you are really paying $400/usable GB. You could replace those 100 HDD with 12 SDDs drives AND get better performance and at a much lower overall cost. Power, cooling and floor space all go down. SDD’s would allow you to use 100% of the drive giving you much better utilization. On top of this, you can leverage IBM’s Real-time Compression capability (the only compression in the industry that can be used for active data, in real time) to further cut your number of drives in half for even greater savings. Combine this with the management time and hassles that are saved by not having to short stroke and rebalance HDDs. This frees up the administrator to do more innovative tasks.

To further substantiate these claims, and to get a better and more quantitative understanding on how much companies could save, David Floyer (@dfloyer) of Wikibon, and perhaps the best researcher in the industry, has done a tremendous amount of research on this topic. David claims that in a 25TB environment, running Oracle, companies could save on average, 30% by moving to an all flash array. (See Chart 1)That is pretty significant. In addition, a company can become 20% efficient which really drives competitive advantage as well as overall share holder value.

To be clear, while this is a bold announcement from IBM, I personally don’t think any of us believe that a company is going to wipe the floor of all of their HDD to go to SDD. As my dear old dad would say, “Son, you don’t understand how the system works.” Which is his way of saying; you can’t change a tire on a moving car. While the IT engine is running, you can’t just rip and replace, too many things hinge on stuff that is going on today and leverages the data where it is.

However, from an economical perspective, as new storage is required, it does make overall economical sense to deploy SDD for new storage needs. That being said, until customers get comfortable with the “all flash” approach, I do believe we will see a hybrid approach to the deployment of flash storage. This is where the use of PCIe cards, network flash arrays and hybrid SDD/HDD storage arrays and the use of intelligent tiering technology such as EasyTier to get the most important data as close to the CPU as possible.

Chart 2 below shows that over time HDD deployment will go down, and SDD deployment will go up significantly. This then begs the question of an even further redesign of the data center that includes data in cloud and data on tape (specifically with technologies like LTFS). This was the subject of a post I had done recently and more forethoughts by David Floyer about a “Flape” or “Floud” infrastructure, where data, as it becomes “stale” (less useful, but you don’t want to delete it) is migrated to tape (in a file system format) or to the cloud, hence giving us a Flash and Tape or Flash and Cloud infrastructure. This could have some significant cost savings while providing the data availability users need. 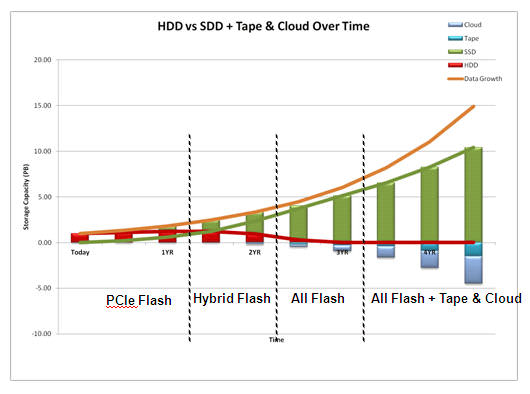 I am proud of IBM. First, they opened the day with a pretty rocki’n video by Centerline entitled, What Can You Do in A Flash. Next, in the midst of the FUD being shot around the industry regarding flash, IBM Storage has come out, very boldly and put a line in the sand. They demonstrated they have much better performance than its competition with much lower latency. They demonstrated the economic benefit for customers, which is of huge importance. They demonstrated the durability and reliability of there eSLC Flash, which is the best in the industry. Finally, they put 4 customers on stage and referenced 3 others all who have developed all flash storage environments based on IBM flash technology. So in a time where IBM has been known for being late to the game when it comes to their storage technology, in true fashion, IBM may not have had an announcement two weeks ago when Fusion, Violin and EMC did, however, the technology, capabilities and client value of this announcement are far superior to others in the industry with real product available today.