There is a lot of discussion around data deduplication for backup these days. (I wish I could deduplicate all the turkey I ate last week.) In fact, Gartner claims that “…by 2012, deduplication will be applied to 75% of backups.” And when asked “Why?” the response was “…deduplication is too compelling to ignore.” But I say “prove it”. So I put together some backup capacity numbers for storing data on tape (non-compressed and compressed) versus storing data, deduplicated (fixed block and variable block), on disk and the numbers show a dramatic savings in backup space which translates into cost savings.

As with any ‘analysis’ numbers can be ‘spun’ to make them say what you want. That said, I tried to be as straight forward as possible, so let me also show my methodology so you can see how my numbers were derived.

Figure 1 below shows, 10 TB of primary capacity growing at 30%, 40%, 50% and 60% along the x-axis respectively and the corresponding capacity of tape or disk consumed along the y-axis is. 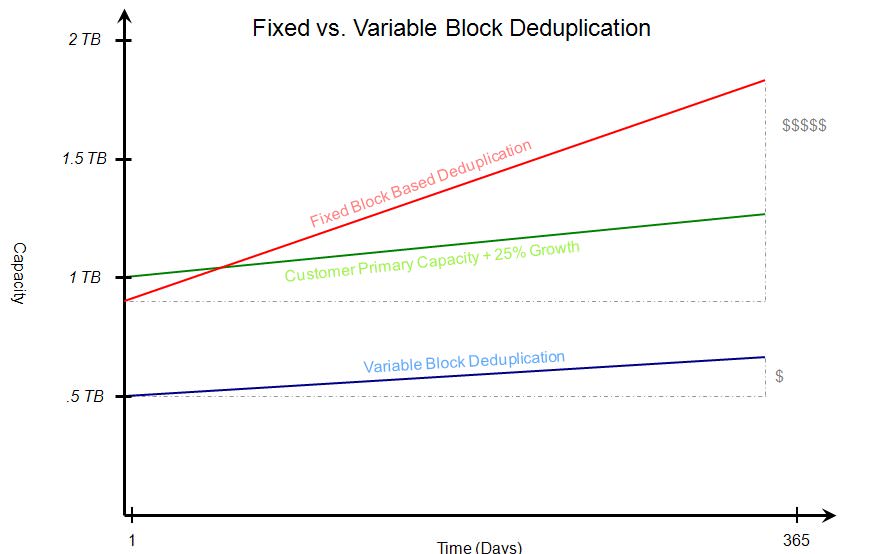 *Note: Some companies will position their fixed block technologies as variable block by stating that you (the user) has the ability to set the block size to what ever you want, however, once set, it stays that way for all of your data. The difference is, true variable technologies adjust the block size on the fly using their algorithms to ensure maximum efficiency with no management.

Bang for the Buck

The most important benefit, as with most things in IT however is overall cost savings. Deduplicated disk solutions are anywhere from 2.5X to 3X more expensive than tape, however with the overall capacity savings, there can be significant cost savings. Figure 3 is representative of the overall costs of new deduplicating disk systems and traditional tape backup systems (including tapes and off-site storage costs). I will caveat this by saying every TCO and ROI has a ton of ‘what ifs’ that factor into overall costs including things like FTE for backup engineers and long term retention costs, but for the most part, disk systems reduce a good deal of these costs (with the exception of power and cooling) and increase the reliability, security and performance of backups and recoveries. 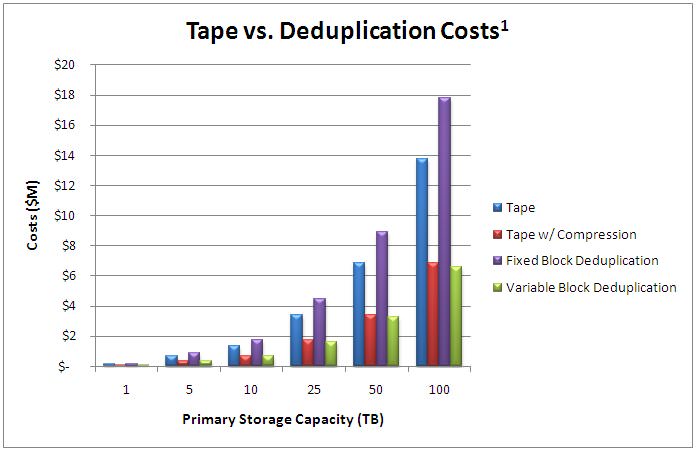 As I stated above there are only a few factors that are involved in this very raw calculation. There are a number of other factors involved with a backup process including WAN costs (if replacing tape with disk), remote office facilities, installation (professional services), and software and hardware maintenance to name a few. But no matter how you look at it, disk based backup with variable block deduplication wins over tape.

Backing data up to deduplicated disk not only saves the amount of backup capacity that is used, it also has other implications for a data protection environment. First, backing up to disk versus backing up to tape helps to reduce the reliance on tape and the inherent limitations, security concerns and reliability issues surrounding tape. Recovery of data from disk reduces the operational costs and decreases the recovery time objective. Additionally the reliability of disk with RAID is much higher than the reliability of tape.

New data protection technologies are evolving backup to a degree where the entire data protection process is getting easier manage by removing multiple points of management (backup servers, media servers, tape libraries and physical tape). As backup continues to evolve, this can help simplify the overall process and;

New challenges in protecting information are arising every day, whether it is data growth, remote office data protection or virtualization, backup is getting harder not easier. Data deduplication is providing backup administrators with tremendous benefits around backup processes and cost savings. It is important to keep in mind that everybody’s environment is different and utilizes different methods and processes for managing and protecting information. It is also important to take a look at your data protection environment today and understand the use cases where it is time to make new investments. I encourage you to look at new technologies to help you with emerging challenges and weigh the overall solution including costs as well as benefits of disk based recovery. New backup technologies that leverage data deduplication can save IT a lot of money and put you on back on the Road to Recovery.